Since 2004, the Fort La Tour site has been accessible by pedestrians and has been promoted as a destination along the trail.  A parking lot and bus drop-off has been constructed on Fort La Tour Street to facilitate easy access to Harbour Passage.  A children’s harbour interpretation center is located only a few short steps from the Fort La Tour site where families can play and learn about the harbour animals.

Between the children’s area and the Fort La Tour site cultural and artistic pieces are on permanent display, including a granite sculpture titled “Window on the Waterfront” created during the International Sculpture Symposium by Hitoshi Tanaka. Other art in the nearby area includes a clay and bronze monument titled “Shards of Time” by Peter Powning, a modern piece depicting the historic shipping of limestone, and tall wooden sculptures of historic figures such as Lady La Tour.

“Window on the Waterfront” – Hitoshi Tanaka 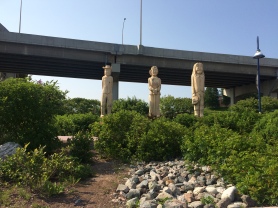 Parks Canada use Commemorative Integrity Statements (CIS) as a way to set benchmarks for managing a site as a cultural resource of national significance.  The CIS for this site was prepared in consultation with the FLDA.  This is the first step toward identifying the appropriate interpretation messages of national significance.  The three primary messages defined in the CIS are: